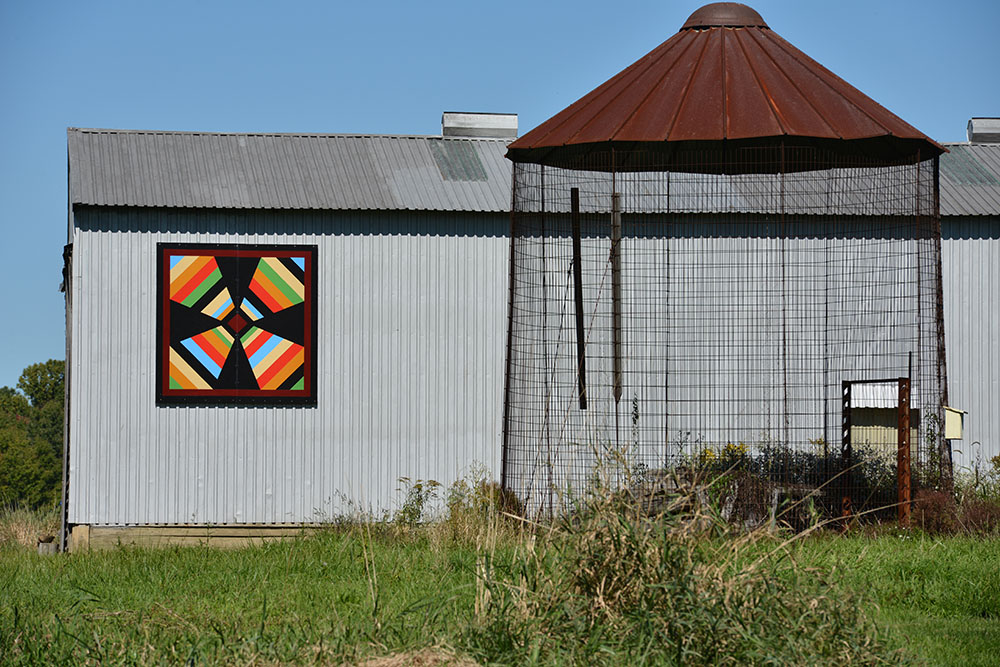 Lynn Moore took up quilting in 2013, after retiring as a teacher. Her friend, Jerilyn Bell, gives her lessons. An Ashtabula Harbor native, Lynn has a family heritage of quilting. Her grandmother, Gussie Mevada Daily, made quilts and gave one of them to Lynn’s mother, Ellen Marie Updegraff, who willed the quilt to Lynn. The quilt is dated 3.14.1914 and there are initials “E.D.” on one corner, a reference to Lynn’s mother.
The strip quilt is in excellent condition.
“My mother saved everything,” Lynn says. “If got something new, she’d put it away and save it (rather than use it).” Lynn also owns her grandmother’s sewing machine and feels that it was the same machine her grandmother used when quilting.
Chris learned about the barn quilt trail and that co-founder Chris Angerman was offering a barn-quilt painting class at the Conneaut Community Center in the summer of 2014. After Lynn shared the farm’s story with Angerman, discussion began about Moore’s Farm hosting a large quilt.</p>
Lynn didn’t have any problem selling the idea to Doug, who began enthusiastic about the trail while attending the Ashtabula County Antique Engine Club’s show in July 2014. After making a 2×2 foot quilt in Angerman’s class, Lynn was ready for the challenge of a quilt with 16 times the area. The pattern was adapted from the quilt that her grandmother made in 1914.

As with many former dairy farms in the county, Moore’s Farm once was a dairy farm and has been converted to grain. They grow hay for the horse farm market and store the bales in a Shenango Steel building.

A second farm building, which includes a small milkhouse, is used for storage. Lynn’s farm tasks included taking care of young cows, and she used the stalls in the Shenango Steel building for that purpose. A single window on the south side of the building dates to the summer of 1988. The summer was brutally hot and Lynn had her husband create the window so the animals would have some relief.

The late Burl and Phyllis Moore were living in Ashtabula on Route 20 when the urge to farm hit Burl. He cut a property-swap deal with the owners of the Caine Road farm who wanted to move into town.

Burl and Phyllis mainly raised beef cattle on the farm; Burl continued to work a factory job while farming. Lightning struck the two-story, timber-frame barn on Aug. 31, 1972. The barn was lost to fire; clear-span Shenango Steel building was erected nearby to replace the old barn. The structure is 40-by-64 feet and has sides 16 feet tall.

The Moore’s son, Doug, born in 1947, farmed the property for 10 years before moving into town with his wife, Lynn, a special education teacher. Doug and his family moved back to the farm in 1985; his mother died in 1986, and his father left the farm two years later. Doug converted the farm to a dairy operation and in 1986 had the 65-foot-tall wood stave silo built by an Amish crew. But just five years later, Doug and Lynn made the decision to get out of the dairy business. “It was either get out or go into debt and get big,” Lynn says.

The beautiful wood silo was added to the farm during the years of dairy farming. An Amish crew built the silo, which is not in use.

Look for the old Bailey bridge on Caine Road near the Moore’s farm. Bailey bridges were used by U.S. and British engineers during World War II to rapidly span rivers and streams as the Allied troops moved across Europe. These bridges later became available to communities that needed a temporary bridge; this bridge has been on Caine Road for years.

Also be sure to visit the Caine Road covered bridge while in the neighborhood.