About the quilt and The Nature Conservancy 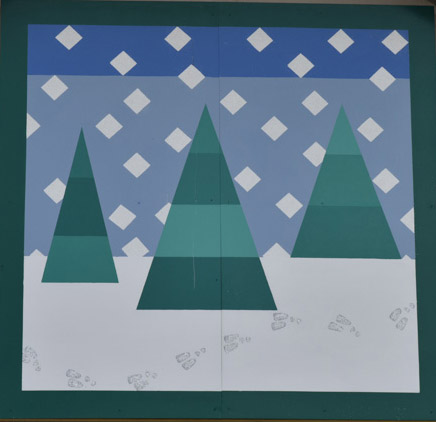 From Interstate 90, take Route 45 to Callender Road, south of Rock Creek. Turn right and follow road to bridge across Grand River. After crossing bridge, look for The Nature Conservancy’s education campus on the right. Head straight on drive for roughly 1,150 feet, then west (left) to the barn quilt barn. Quilt is on north side. While at the campus, visit the nature trails and learn about the Morgan Swamp natural area.

The Callanders once had a small steamboat landing at this location and the boat would make short excursions on the Grand River, as far as Shaffer Road to the north and Route 6 to the south. A picnic grounds was at this location, and the Callenders made money by selling baked goods and holding concerts and picnics on the grounds.

About The Nature Conservancy and Morgan Swamp:

The Nature Conservancy received the camp as a donation from Cleveland City Mission. Some of the buildings were razed, others, including the gymnasium and former hunting lodge, have been renovated and repurposed to provide a campus for outdoor education. TNC also owns the Morgan Swamp, one of the largest protected wetlands in Ohio. All told, the Conservancy protects more than 1,400 acres in Ashtabula County. There are hiking trails, interpretive signage and programming available at the campus on Callender Road.