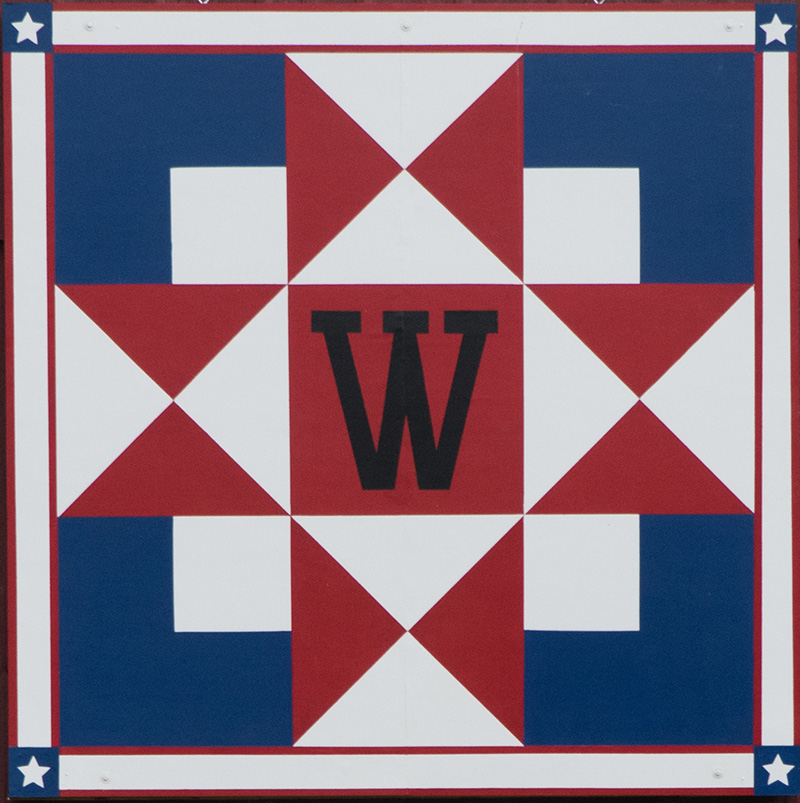 Attractions in this area

include Gary Tabor’s Toy Museum, which is a short distance south of this quilt, on the opposite side of the road. Look for the white barn with a slate roof and the white metal building with a barn quilt on the side. If you see the small covered bridge to the left, you’ve gone too far! The bridge also is Gary’s.

Simons Road is off Route 322, shortly before the highway enters Pennsylvania. Head south on the road about 1/2 mile to the farm. There are two red, barn-like structures on the farm.

Ohio Star variation, designed by Frank’s son. This quilt was created for Frank’s mother, Carol, by Frank and his two sons. 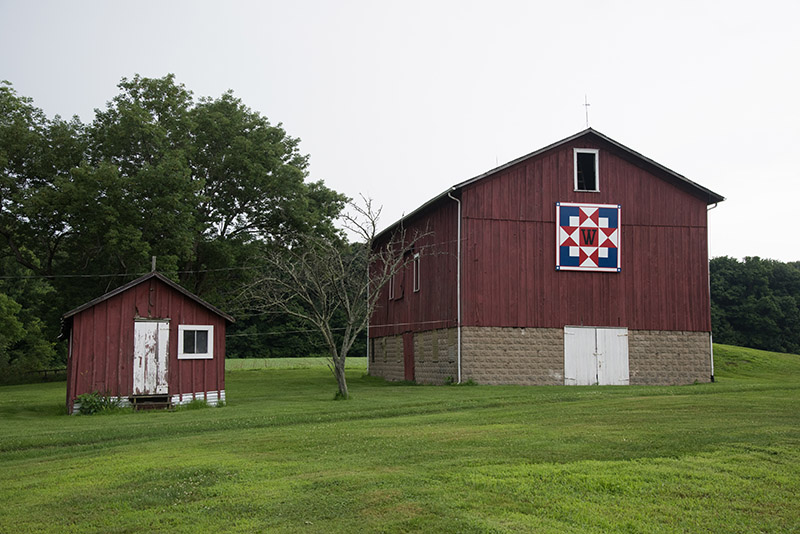 Frank Weese is a professional painter and, when contacted by the Barn Quilt Steering Committee about placing a quilt on his barn, went right to work. He built, painted and installed the quilt within two weeks of the initial contact.

The house to the south of the barn is the oldest residence on Simons Road South. The earliest section, made of brick, dates from 1832; bricks came from a local factory.  There are two fireplaces that feed into one chimney. A trap door was in the floor of a northeast room. This dropped into a cellar without windows, and it is believed the cellar was used for hiding fugitive slaves on the Underground Railroad.

The frame portion of the house was added in 1880 and was built from timber cut on the farm and milled locally. One beam is said to be 34 feet long.

Locals still refer to this place as the “Grover Fetterman house,” although it is several generations removed from the Fettermans, whose ownership dates back to at least the 1870s. John and Sarah Ray lived in the house in the early 1920s; Sarah and her boys lived in the front of the house and another family, which ran the farm, lived in the back section. Other names connected to this farm over the years have included Fee, Singrey and Koivisto.

Vess and Leafah Johson were owners in 1956, and their daughter, Carol, married Frank Weese. Frank and Carol were the parents of Frank and Michael, current owners.

This farm once included a small cheese factory, sugar bush and one-room school.