From Interstate 90, take the Route 11 exit south to Route 6. Exit on Route 6 and head west; Day Road will be the second road on the right and barn is visible from Route 6. 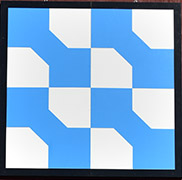 Melvin Marrison and Evelyn Zaebst purchased their Day Road farm in 1959 from Sadie Guest, the widow of Jake Guest. The Guests were the original owners and built the 36-by-60-foot barn circa 1920.

The late Levi Marrison, Melvin’s father, told the family that he remembered the Day Road barn’s construction because the prior barn owned by the Guests had burned after being struck by lightning. Jake was milking when the lightning struck occurred.

The barn had been used for dairy farming, a tradition carried on by Melvin and Evelyn. “We were farming it before I bought it,” Melvin says. The farm consisted of 55 acres and was in good condition when Melvin and Evelyn made the purchase.

The barn would hold 18 cows, but Melvin used it for raising replacement heifers rather than milking.

Melvin says the barn has changed little in the nearly six decades of his ownership. The square, wooden silo on the barn’s south end has not been used to store silage since 1970, when he left the family dairy partnership.

That silo is a regional phenomenon that can be seen on several other barns in the southeast corner of the county. Square silos were easier to build than rounded ones; farm workers familiar with the basics of carpentry were therefore able to build the structures.

Melvin is retired from farming and leases his land to another farmer. The barn is used for storage; Melvin painted a portion of the barn in preparation for the barn quilt hanging in October 2015.

Evelyn Zaebest became interested in quilting in the early 1970s, when she joined a group of women quilters who were based at Cherry Valley United Methodist Church.

“We hand quilted tops for other people and made quilts for families in the community that lost their homes to fires,” she says.

For the past several years, Evelyn has been a quilter with the Steeple Stitchers of First Congregational Church, UCC, Andover.

“We have adopted the fire quilt project,” she says. “We made 100 pillowcases in 2005 for the Millron Pillowcase Challenge. Our current project is Night Night Bags for Homesafe Children.”

Homesafe is a shelter for women and children who need temporary housing to escape domestic violence. Each child receives, upon intake, a  homemade bag with a small quilt, stuffed animal and book inside.

“We also hand quilt tops for other people and have a craft table of homemade crafts to sell at the church or a local craft sale,” she adds.

The Steeple Stitchers includes women who do not quilt but attend the meetings for the socialization. “It’s quilting and therapy,” Evelyn says.

At home, Evelyn continues her passion for quilting. “My house is filled with quilts in various stages of being furnished,” she says. “All of my family have a hand quilted quilt, as do many friends. Homemade quilts are my favorite baby shower gift.”

For their barn quilt, Evelyn chose the bow tie pattern, one of her favorite quilting motifs.

“I got that pattern a long time ago and I just like it,” she says. “It’s very easy to do.”

She has made at least four full-sized quilts in the bow-tie pattern, as well as several baby quilts.

While selecting the pattern was simple enough, coming up with the color scheme and number of repeats for the barn quilt was much more challenging and time consuming.

“I didn’t know if I wanted four blocks or one large one. The hard part was the colors. I must have colored (the pattern) in 10 different colors on graph paper before I selected blue.”

Evelyn held a reception for her barn quilt the day after it was installed, Oct. 25, 2015. Her quilting friends and family attended the event, which was marked by hanging three of her bow-tie quilts before the barn quilt and displaying other examples of her work on the clothesline. About three dozen people attended the opening.

Her interest in barn quilts was sparked by Suzi Parron, who visited the county in the fall of 2013 and made a presentation to quilters. Evelyn attended and researched the possibility of a barn quilt, but did not act on her research until the grant program became available in 2015.