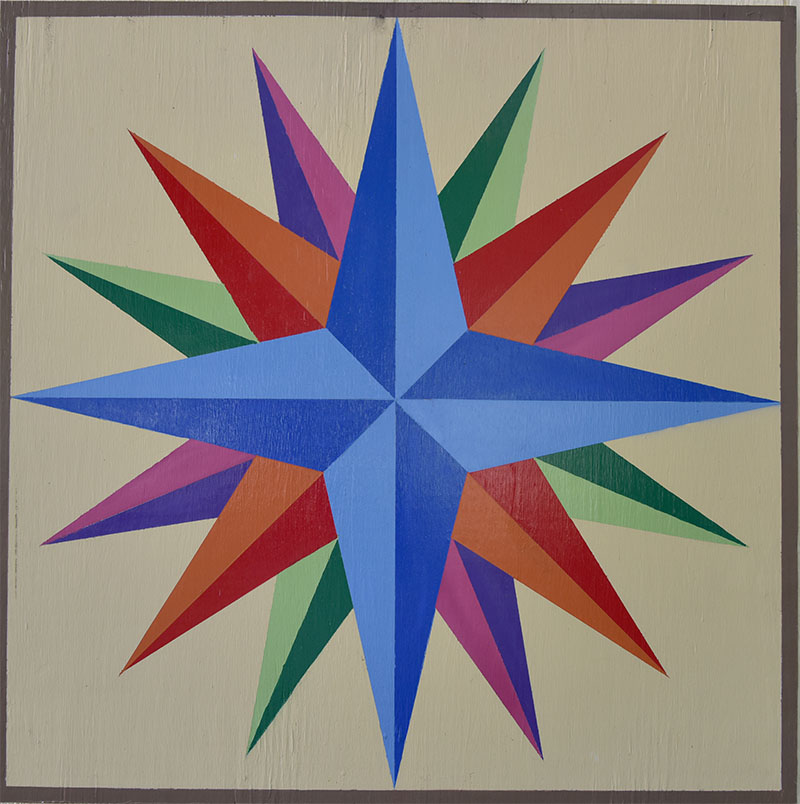 From Interstate 90, take Route 7 north from the Conneaut interchange. At Route 20, turn right to follow Route 7 to Broad Street. Turn north on Broad and go under the railroad; at light, turn left, go one block, then right onto Buffalo.

George Gates’ served four years in the U.S. Navy, but that is not why he selected the Mariner’s Star pattern for a barn quilt.

He displays the quilt on the side of a garden shed, but he has not garden. Nor does George quilt.

His sister, Mary Ann Boyce, is a quilter and pitched the idea of a barn quilt to George. He followed through and made a 4×4-foot Mariner’s Star quilt for her. Although not on the trail, Boyce’s quilt is on her garage at 312 North Amboy Road, Conneaut.

George liked the quilt so well, he decided to use the other half of the sheet of sign board to create a second Mariner’s Star BQ for his shed.

“But I wanted more color in mine,” he says.

George says that a Gates family member has lived at 680 Buffalo Street since his father and paternal grandmother traded their store in Conneautville, Pa., for the saltbox house and $500. That was in August 1932. Except for the four years George was in the navy, he has lived at the Buffalo Street address all his life.

His ancestors settled in Beaver Center, Pa., after the War of 1812. His great, great grandfather was shot in the knee while serving with the Union Army at Fredericksburg. Unable to work on the farm when he returned home from the war, he started the store. His son and grandson worked in the store until The Great Depression took its toll on business.