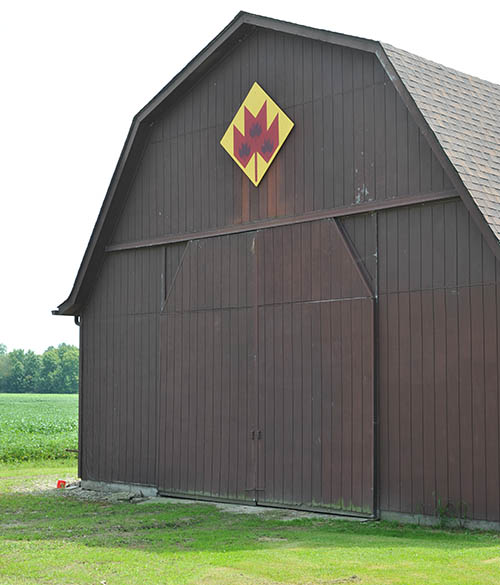 Route 11 to the Route 46 exit; head south on Route 46 to Griggs Road, before bowling alley, on left. Farm will be on right. 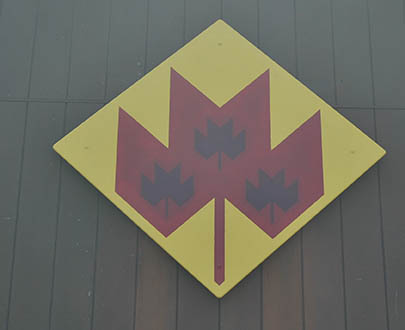 4×4 feet, Maple Leaf.The design is by Ken Moisio, Cynthia Nagy’s brother. A resident of Indiana, Ken is also designing a smaller, 18-by-18-inch barn quilt for the brick utility storage building on the farm.

The barn, measuring 32 by 64 feet, was built circa 1990, when Joseph and Cynthia Nagy purchased their Griggs Road farm. The property, purchased from the Newman family, was previously farmed but had reverted to brush. Joseph worked a factory job while reviving the 62-acre farm. He had cattle for a short period, but mostly has done grain crops on the land.

“I like grain farming better,” he says. “You don’t have to clean up after the livestock!”

The farm was named Maplegate because Joe has always liked maple syrup and maple trees. While not a commercial producer, Maplegate makes syrup for their family use.

Joe farms his 62 acres plus other farmland in the county. Joe does most of this by himself, with occasional help from their son, Jared.

“I hire nothing done,” says Joe, who also repairs all his equipment. As if the farms were not enough to keep them busy, the couple own a coin-operated laundry and a rental house! Joe retired from his factory job two years ago, but he can’t give up farming. “I love it,” he says.