Interstate 90 to the Route 11 exit; south to Route 46, turn right, toward Jefferson. Turn on West Walnut, to Fairgrounds. 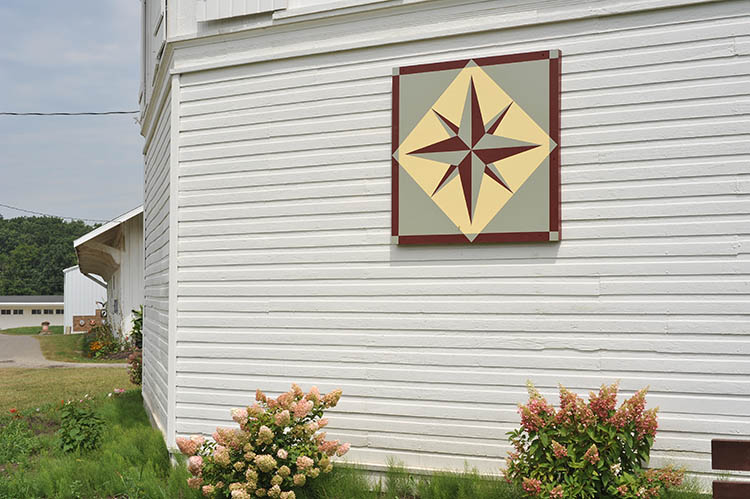 Ashtabula County’s connections to Lake Erie and the maritime industry are very strong and go back to the early 1800s, when ships were built at Ashtabula, Conneaut and Geneva. Liberty ships that aided in World War I were built in Ashtabula at the Great Lakes Engineering Works. Many lakes captains, engineers and other crew members made their homes in these port communities.

The eight points on the compass also speak of bringing to a central hub the various communities and agricultural efforts in the county, to a common location, the fairgrounds, every year.

This barn quilt celebrates the 100th anniversary of Ohio State Extension and 4-H. The green used in the quilt also gives a nod to the 4-H, as do the four large points on the compass.

The fairground’s floral building uses unusual octagonal design, which was popular for a short period of time in the mid-19th century. Ashtabula County has several octagonal homes and one octagonal barn (Hatches Corner Road, east of Route 7, Monroe Township).

There is photographic evidence that this building existed in 1897; it does not appear on an 1878 map. The building was last painted in 2005 and needs repainting and repairs prior to the barn quilt installation. Volunteers are being sought for the project, to which the Master Gardeners of Ashtabula County have pledge $1,000.