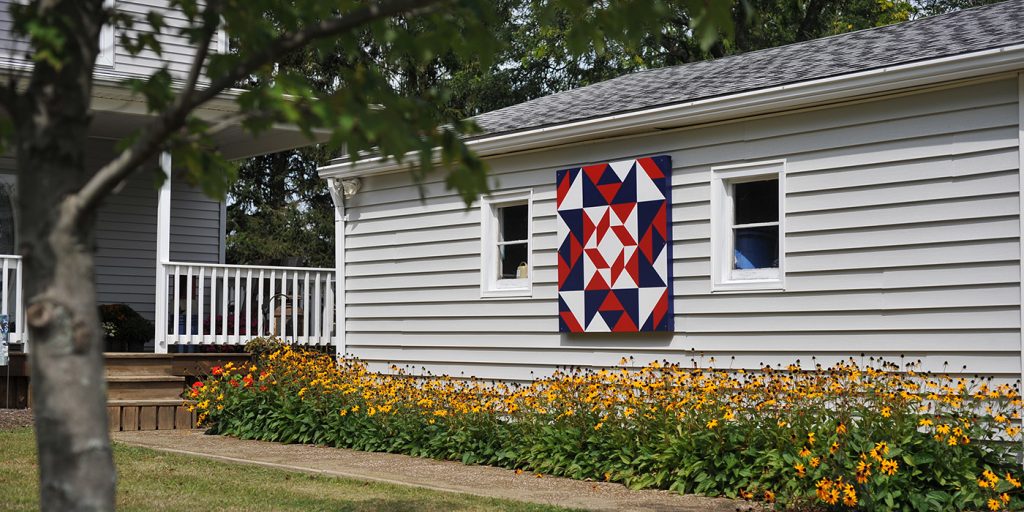 From Interstate 90, go east on Route 84 (immediately across from east-bound I-90 exit ramp, look for large Adult bookstore sign). Follow Route 84 about two miles to location on left. 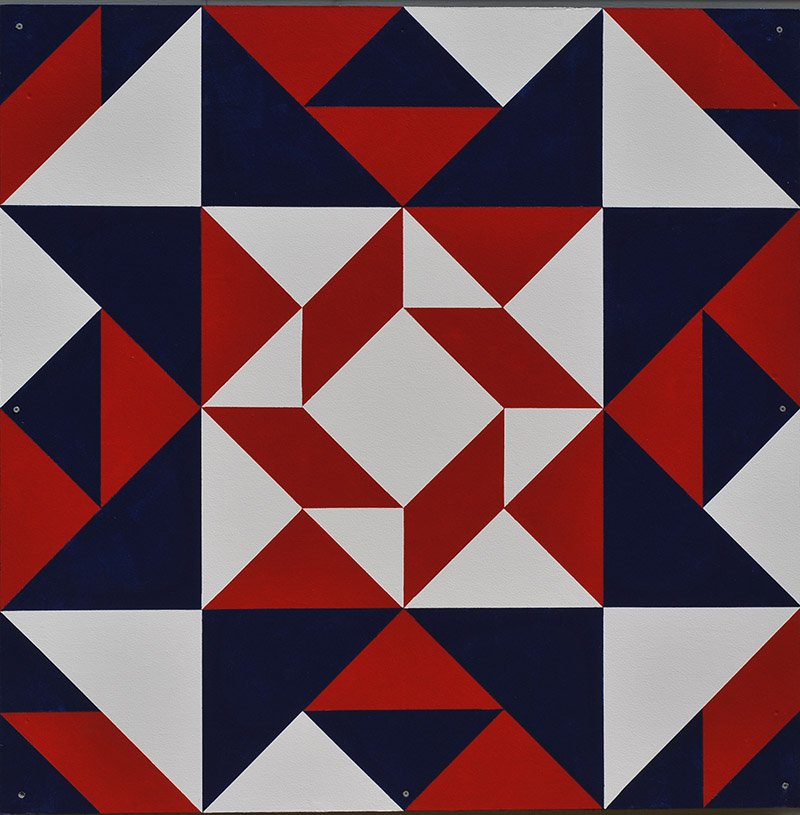 Michael Runyan, a nephew to Al and Kathy Runyan the barn quilt owners, was killed in Iraq while serving with the U.S. Army in August 2010.  From the Military Times website:

HONOLULU — The Department of Defense says a Hawaii-based soldier from Ohio has been killed in Iraq after insurgents attacked his convoy vehicle with a bomb.

The Department of Defense said Friday that 1st Lt. Michael Runyan of Newark, Ohio, died Wednesday in Balad of injuries received in Muqdadiyah.

A native of Ashland, Ohio, Runyan earned a bachelor’s degree in criminal justice in 2008 from Xavier University in Cincinnati, where he was an ROTC cadet.

His parents, Jeffrey and Renee Runyan, have lived in Newark since 2003. His mother, Renee, teaches math at Granville High School.

Sister-in-law, Brittany Runyan says the soldier had visited Ohio before he deployed on July 1.

“Michael had this amazing energy,” she said. “He could make anyone laugh, and could always cheer you up. Everybody adored him.”

U.S. Army 1st Lt. Michael L. Runyan, who was killed in Iraq Wednesday, will be laid to rest in Greenlawn Memory Gardens later this week, according to family members in Ashtabula County.

The son of Ashtabula County natives Jeff and Renee (Rebera) Runyan, Michael was 24 and in the first month of his first tour of duty when a roadside bomb hit his vehicle as it traveled in a convoy through Muqdadiyah, Iraq. According to the U.S. Department of Defense, Michael died from his injuries in Balad, Iraq.

Michael graduated from Ashland High School in 2004 and  participated in the ROTC program at Xavier University, where he earned his degree in criminal justice in 2008.

His uncle, Alan Runyan of Kingsville Township, said Michael wanted to be a soldier, just like his older brother, Alex, a pilot with the Marines Corps. Alex, has already served one tour of duty in Afghanistan and is scheduled to deploy to that war zone again in November. Family said Alex inspired Michael to be a soldier, as well.

“This was what (Michael) was trained to do,” said Alan Runyan, who last saw his nephew in June. He said Michael came to Ashtabula County as part of a two-week visit to Ohio before being deployed.

“He was fine with it,” said Michael’s aunt, Emily (Rebera) Harley of Kingsville Township. “That’s what he wanted to do. He loved the military. He went through the ROTC program and he was very good at it. He was a great, great leader.”

“He was excited to go and ready to go. He was looking forward to it,” Alan Runyan said.

He described the Ashland native as a “young man who always lit up a room when he came in. He had a big smile, enjoyed life and was an upbeat, positive person.”

“Mike was a good kid and he always had a beautiful, wonderful smile,” said Harley, who considered him one of her own kids. She said he loved to play golf and swim, played soccer and enjoyed hiking the Appalachian Trail. He planned to return to it and do more hiking after his military service.

“He loved doing that. He loved the Appalachian Mountains,” Harley said.

His parents are Edgewood Senior High School Class of 1972 graduates. Formerly of Ashland, the couple moved to Newark after Michael, their youngest child, graduated from high school. Jeff is a retired judge; his wife a teacher at Granville High School, Newark.

Michael has a sister, Lesley Hess, who is married and lives near Dayton. Michael was unmarried, but Harley said Michael’s girlfriend, identified by The Columbus Dispatch as Shaina Cales, was with Michael when he visited her last month. Harley said Michael told her that he planned to give Cales an engagement ring when he returned from his first tour in December.

Alan Runyan said that his brother and sister-in-law were on their way to visit Alex and his wife, Brittany in San Diego when they received the news. Jeff and Renee, and their immediate family, left Friday for Dover Air Force Base in Delaware to await the return of Michael’s body, which arrived Saturday afternoon, according to the Associated Press.

Alan Runyan said the family will gather in Ashtabula County in a couple of days to make the arrangements. He said the Runyan family has several plots in Greenlawn and Michael will be laid to rest near his paternal grandparents.