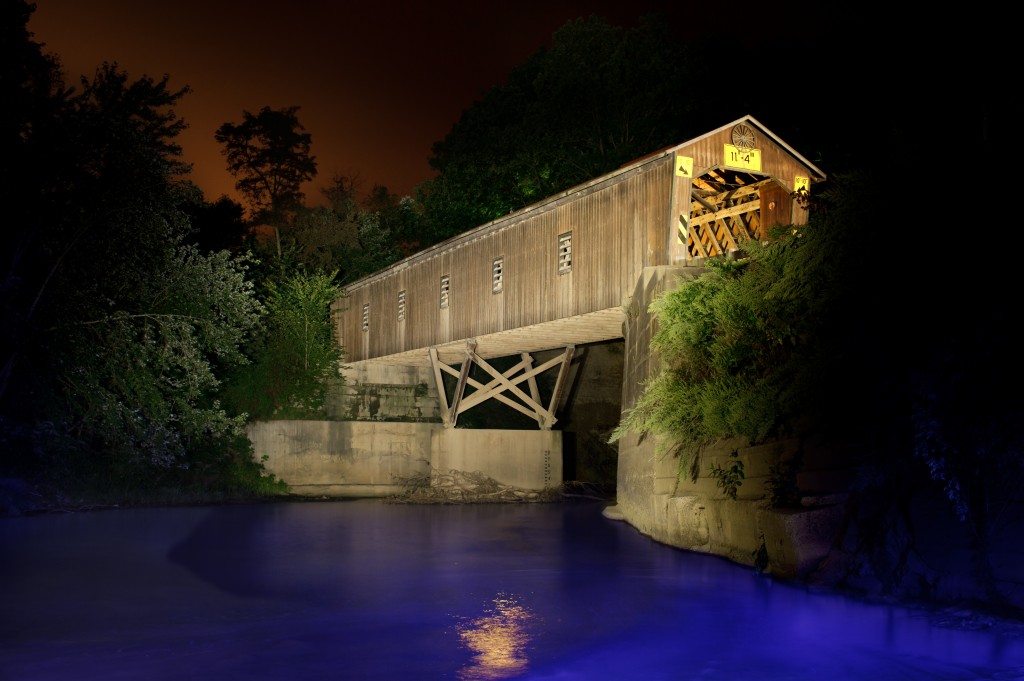 Creek Road, Conneaut. From Kingsville, take Creek Road off Route 193 (exit off Route 20 and go north through town and turn at top of hill, opposite Baptist Church). Follow road towards Conneaut, it will become a dirt road approximately 1/2 mile prior to bridge.

Narrative from “The Covered Bridges of Ashtabula County“:

Rising 25 feet above the scenic Conneaut Creek, the Creek Road covered bridge is a Town lattice, single-span of 112 feet and 125 total length.

Historians have been unable to nail down the construction date of this bridge, resorting to “around 1900” as the best guess for when it was built. A bid announcement that appeared in the Aug. 5, 1871, Ashtabula Weekly Telegraph suggests an earlier date – commissioners were seeking bids for the abutment of a new bridge over Conneaut Creek at Amboy.

The bridge was closed in 1963 when an ice jam caused damage to the bridge’s support. An iron center-span support was added, but it became a collection point for debris. During the 1994 rehabilitation of the bridge, the center support received a wall-type pier that redirects the river’s flow. According to Smolen, adding the steel frame work effectively distributes the midspan support and roughly quadruples the carrying ability of the “girder.”

The county spent about $50,000 on the 1994 renovation, which included replacement of the deck and lower structural timbers. New exterior siding was added, as well. The revived bridge was opened to traffic in September 1995.

Camp Peet, a Scout camp established in the 1920s, borders the creek at this point and provides hiking trails along the scenic Conneaut Creek.