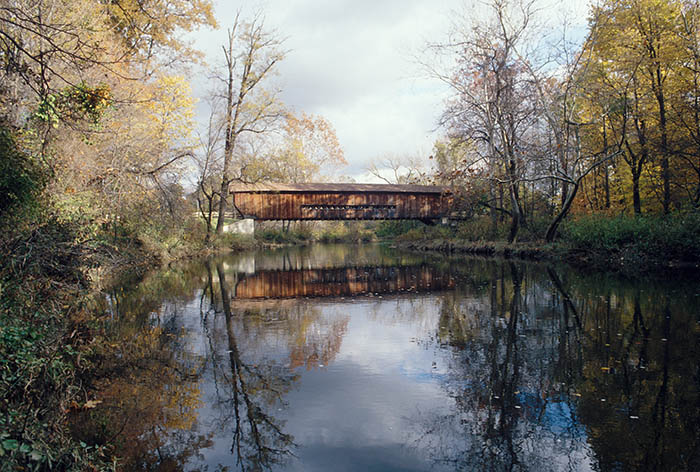 Narrative (from “The Covered Bridges of Ashtabula County,” by Carl E. Feather:

Sheffield Township’s Benetka Road covered bridge is claimed by just about every person in that neighborhood as their covered bridge.

The late Paul and Jeanne Wing, who lived on the property to the south of the bridge for decades, called it their bridge, as does Marion Peck, who grew up at the south end of Benetka Road.

“There is no bridge like my bridge,” Marion says.

The road was named after her grandfather, James Benetka, a Slovakian immigrant. But the area on the Ashtabula River where the bridge stands was known as Clark’s Mill long before the road was named. The saw and grist mill at this spot were the largest of the four mills in Sheffield Township. The saw mill was built in 1829 and expanded to a flouring mill in 1840. The mills were rebuilt in the 1880s, according to Catherine Ellsworth’s history of the township.

It is likely there was a bridge of some sort over the mill race and stream early into the mill’s history. But as to when the existing bridge was built, there is debate. Most sources cite a date of 1900, but Howard Stanton, who owns land along the river, says his grandfather, who grow up in the area, said a platform bridge spanned the river until 1878. That is when a wagon loaded with wheat destined for the mill crashed through the deck of the bridge; necessitating the investment in a new bridge. Insert image 189

The timing was bad, however, for that was the same year as the devastating September floods. A newspaper report of the flooding in Sheffield Township stated that two bridges along Ashtabula Creek suffered damage, including the bridge at Clark’s Mills, which was “carried away wholly.” Volunteers managed to salvage the bridge by pulling it back to the abutments using block and tackle.