Christina Angerman, the co-founder of the Ashtabula County Barn Quilts Trail, died at her home in Conneaut on March 10, 2017.

Christina and Kathy McCarty started the BQT in 2014, after hearing a presentation by Suzi Parron in Ashtabula. Chris was an avid quilter and took her passion for barn quilts to the Conneaut Art Center, where she taught classes in painting barn quilts. Dozens of barn quilts made by Chris and her students adorn the homes of Ashtabula County residents.

She was born Sept. 16, 1944, in Dayton. Christina was the daughter of the late Otto and Wanetta Campbell Urban. She married Douglas Angerman in 1970.

Christina graduated from Ohio State University with degrees from the Colleges of Arts and Sciences and Pharmacy.

She is survived by her husband, two sons and their families.

A graveside service is March 15 at Foxfield Preserve, a nature preserve cemetery, in Wilmot.

The steering committee of the Ashtabula County Barn Quilts Trail extends its gratitude to Chris for her vision and dedication to this effort and our sympathies to the family for their great loss. 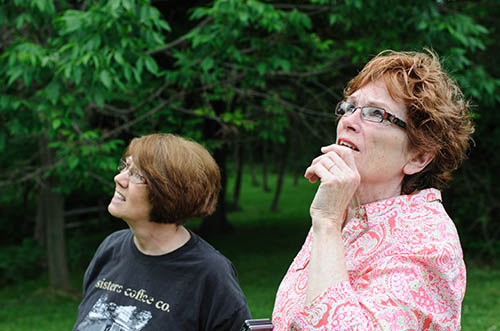 Christina Angerman (right) watches as the first barn quilt on the Ashtabula County Barn Quilts Trail is raised on the Blakeslee Log Cabin Barn in Plymouth Township, June 2014. Christina and Kathy McCarty (left) are co-founders of the trail.