The 4-by-4-foot, peacock-design barn quilt is located at 3162 Route 193 in Sheffield Township. It is mounted over the second-story balcony of the house, owned by Daniel and Jane English.

The BQT committee welcomes the English family to our family of barn quilt owners. Thank you!

There has never been a better time to enjoy Ashtabula County’s barn quilt trail than this spring and summer. Gas is cheap, the landscape is greening and all of us could use a respite from the house without violating the social-distancing guidelines that have been implemented during the pandemic.

Use our website to plan your outing and map a route that will take you on a journey along scenic byways and through charming small towns and villages. Roll down the windows, take a deep breath and allow the sunshine to evaporate your winter blues and news overload.

You can download a map of the county and its quilts from this site or seek out a printed map in the 2020 Ashtabula County Visitors Guide as tourism businesses reopen. Or request a guide/map at the Ashtabula County Convention and Visitors Bureau website.

Welcome to our latest barn quilt, on the front of the Herb Garden School of Cooking, south of Jefferson on Route 46. 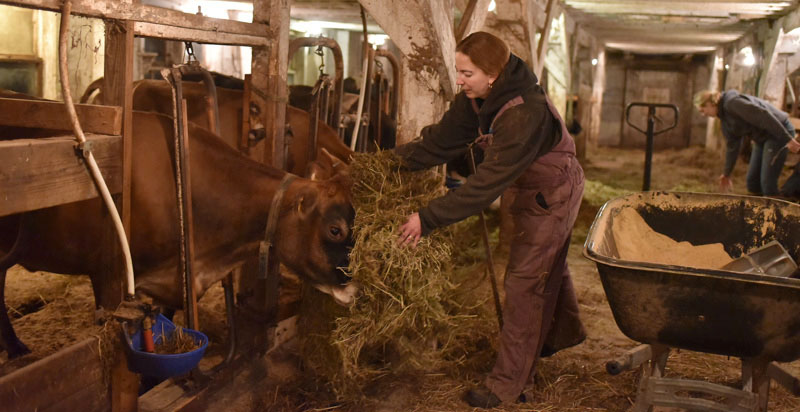 2015 was a good year for the Ashtabula County Barn Quilt Trail.

Backed by a grant from the Civic Development Corporation, the steering committee accomplished its goal of adding more large, 8-by-8-foot quilts to legacy barns and covered bridges. The last of these went up as the year came to a close, on the Smolen Engineering Barn in Jefferson Township.

Our 2016 map, which is part of the Ashtabula County Convention and Visitors Bureau visitor’s guide, will soon be printed. We are running out of room on the map, with more than 60 barn quilts on the trail. Two years ago, there were none.

This spring, we’ll welcome Suzi Parron back to our county as she does a presentation and book signing at the Ashtabula First Church of the Nazarene. Suzi’s first presentation in the county, more than two years ago, got the ball rolling for us to start  the trail; imagine what her second visit will do!

We already know that her new book will include a  photograph of the Graham Road Covered Bridge decked out in its new barn quilt. Earlier this year, the trail got a visit from Neil Zurcher, who featured it on his One Tank Trip segment. And we’re told that Cleveland Magazine has slated a story about the trail for its May 2016 issue.

All these good things have come about through the dedication of our volunteer steering committee and property owners who are part of the trail. We are grateful for every barn owner who has taken the time and resources to pursue this amenity. And we welcome those who are still sitting on the rail fence to make the move in 2016 and become part of the trail.

During 2016 we hope to bring our focus back to the county’s farmers and their iconic barns. We too often forget the personal sacrifices that farmers make in producing our food. A recent story in The Ashtabula Wave about the Brinker family, which has a barn quilt, will serve as a reminder of the sacrifices. Be sure to check it out!

After weeks of hard work by Jacklyn Krysna of the Ashtabula County Convention and Visitors Bureau, trail co-founder Kathy McCarty and designer Linda Natco, our 2016 barn quilt trail map is ready for the printer.

This map, which shows the location of barn quilts, wineries and covered bridges, will be inserted into every 2016 Ashtabula County Visitors Guide. The ACCVB typically has a press run of 80,000 guides, which are printed in January.

You don’t have to wait until then to see the map. It is offered as a download that you can view online or print.  Please keep in mind that this map anticipates what quilts will be up as of June 2016, so some that are listed on the map won’t be completed and installed until then.

The steering committee is particularly pleased to have at least two sites pertaining to Joshua Giddings sporting barn quilts. His law office in Jefferson has a quilt that is installed on posts, and the Giddings Road Covered Bridge will have a barn quilt on the portal. The former barn quilt was made possible by a generous donation from State Rep. John Patterson, D-Jefferson. The Ashtabula County Historical Society funded the installation. Gary Tabor of Williamsfield Township painted and installed the quilt with assistance from Dave Martin, also of the society.

These sites are expected to be popular spots during the Republican National Convention in Cleveland next year; having barn quilts at these Gidding landmarks will add another layer of interest for tourists.